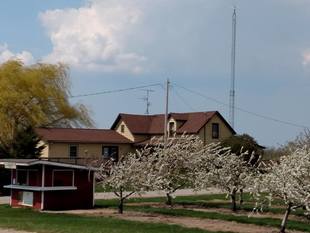 Welcome to  Warren Orchards: Between The Bays. We have proudly served our community with locally grown produce for nearly 150 years. When the farm was created in 1867, it started as 60 acres and has grown to 90.  Back then the homestead was used as a half-way house. Wagons would stop there to water their horses before they went up Kelly Hill. The Warrens had a small store where they sold a few items such as fruit, vegetables, and tobacco to those who stopped.

Warren Orchards was one of the first orchards on the peninsula. The first owners, John and Rebecca Warren passed the farm to their son Frank and his wife, Esther.  Their son Keith and and his  bride, Jean raised their four children there, while taking over the farm operation. In 1975 a second farm was purchased and Keith and Jean’s son Gary took over the day to day running of both farm locations.

Gary and wife Wendy brought in their son Jeremiah in 2009. At that time, they added Between the Bays to their business name, to market their fresh fruit . Unfortunately , Gary lost his battle with Younger Onset Alzheimer’s disease in 2014. Wendy and  Jeremiah continue to honor his memory by offering you the freshest, highest quality produce available; growing  cherries, apples, saskatoons, peaches, plums, nectarines and apricots.  Other local fruits and vegetables are purchased to round out our inventory. Local honey, maple syrup, jams and baked goods are also available. 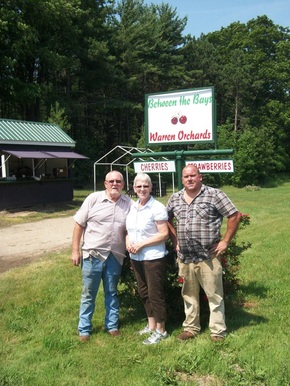